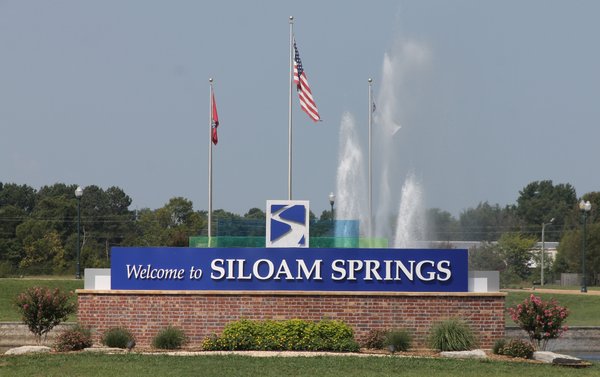 Talk of land sale leads to debate in Siloam Springs

SILOAM SPRINGS — A discussion about a possible land sale led to a debate among city administrators on Sept. 20 during the city council meeting.

The discussion centered on an offer from the Oklahoma Energy and Environment Secretary on behalf of the Grand River Dam Authority to purchase land in Oklahoma owned by the Siloam Springs Water Resource Co., according to a staff report prepared by Phillip Patterson on September 1. 13.

In April of this year, Patterson informed the board of an offer from the Oklahoma secretary for 317.18 acres of the roughly 450 acres the city owns in Oklahoma for $375,000 or $1,106. per acre, the report says. The land is undeveloped and sits in a 100-year-old floodplain, the report said.

Patterson said at the meeting that council discussed it again on July 5, and based on those discussions, the city administrator concluded that if the city was interested in selling anything, it should be at market price.

The city also needed to confirm with the Arkansas Department of Health that it would agree to the sale of any portion of the required buffer zone around the water intake, Patterson said.

“I also thought it was worth asking the Oklahoma Energy and Environment Secretary if he was or would be interested in purchasing less acreage,” said Patterson.

Patterson proposed three parcels of just under 100 acres further south in three sections of the land. In April, Patterson contacted the health department to determine their extent or to ask them to confirm the exact extent of the buffer zone.

“The minimum required buffer zone, as worded in their regulations, is 300 feet either side of the river’s edge, one-quarter mile upstream and one-quarter mile downstream of the intake, but that’s the minimum,” Patterson said.

On Sept. 1, staff received a revised offer from the Oklahoma secretary to purchase the property for $2,250 per acre, Patterson said.

Based on the information, Patterson said the board had three options to consider. The first option is to sell the 317.18 acres for a total of $713,633 subject to a conservation easement and a first right of refusal should GRDA ever offer to resell the property, Patterson said.

The second option would be to sell a total of 95.85 acres for a total of $215,662 subject to a conservation easement and a first right of refusal should GRDA ever offer to resell the property, Patterson said.

The final option was to reject the latest offer and retain ownership of the entire property in Oklahoma, Patterson said. City managers – with the exception of director Mindy Hunt, who was absent – ​​gave mixed reactions to the proposal.

Director Marla Sappington was the first to comment on the matter. She said she was against the sale of any part of the land belonging to the water resources company.

“I don’t care if it’s a floodplain,” Sappington said. “That’s no excuse to sell. I think we have to keep him, and I’m very adamant about that.”

Sappington also raised a lawsuit that took place in 1995 where WH Langley successfully sued the water resources company for 135 acres of land and said GRDA initially offered too little for the land the city owns.

Director David Allen said he was aware of what was discussed at Langley’s trial meeting but did not know the specific details.

“I don’t know,” Allen said. “But I know the first time I think this happened when the city was sued and there was a settlement reached where the city lost property that they owned. It was an asset owned by the citizens of the city in the State of Oklahoma.”

Allen also raised a second lawsuit filed by Bob Farley for 38 acres east of Watts, Okla., saying he was unaware of that lawsuit until he was re-elected to the city council. .

He asked Patterson for a history of any lawsuits or settlements where the city or water resource company has lost property in Oklahoma for as long as the city has held it.

Farley sued the city in 2008 over ownership of the 38 acres upstream from where the city draws water from the Illinois River, according to a June 13, 2010, Siloam Springs Herald-Leader newspaper article.

The lawsuit was settled in 2010 where the city retained ownership of the land, but Farley could cut hay on the property, the article said.

Following Allen’s comments, director Brad Burns spoke about the history of the land as well as the Lake Francis Dam. Burns then said he did a little research and produced minutes from the Illinois Water Development Co. board of directors held on January 2, 2001.

Burns listed the meeting attendees, including Allen. Burns also produced the minutes of the Jan. 4, 2000 meeting, where a motion was seconded by Allen to appoint Mayor Judy Nation — then a member of the city council — as chair.

Next, Burns presented a June 2009 email from then-Mayor David Allen requesting information about one of the lawsuits. Burns did not specify which lawsuit it was.

“So we can’t sit here and act like we don’t know and there’s innocence,” Burns said. “It’s not Director Allen’s fault. It’s not Madam Mayor’s fault. It’s the hand that was dealt. These are the facts.”

Burns also said the city has an opportunity with the upcoming WOKA Whitewater Kayak Park, which will open in 2023, where people will come to Siloam Springs to buy food and supplies for camping and believers, selling the land will offset the tax increase and increase revenue for the city.

“It’s an opportunity for us,” Burns said. “It’s not about the money. It’s about preserving this land that’s not in Arkansas and out of state.”

Allen asked Burns what was the point of introducing the minutes and email. Burns responded that Allen said he had no knowledge of the lawsuit. Allen said he didn’t say that and was aware of the first trial but not the second trial.

The June 2009 email was an attempt by Allen to seek clarification on the second trial and does not understand the point of naming the other board members.

Allen also said he doesn’t see the point of selling currently protected land to another entity that will protect the land.

“I can see ourselves leaning into conservation,” Rissler said. “I can see us managing on our own.”

Manager Reid Carroll said he’s not concerned about selling the land, but if the city plans to keep it, it needs to be handled properly.

“If it hurts us, we have to make alternatives,” Carroll said. “We have to see that it can be maintained and maintained properly, whether it belongs to us or someone else.

Manager Carol Smiley said she had no problem selling the three plots of land to the south, but would like a conservation easement.

“I think as WOKA Park gets established and we have a lot of tourism, it will take more effort to manage this land,” Smiley said.

Patterson summarized the board’s comments and said he would discuss the matter with Hunt in a few weeks. Depending on whether she agreed to sell the three plots, he would return with a resolution to negotiate the sale. At that time, the directors can vote for or against if it was the pleasure of the board.