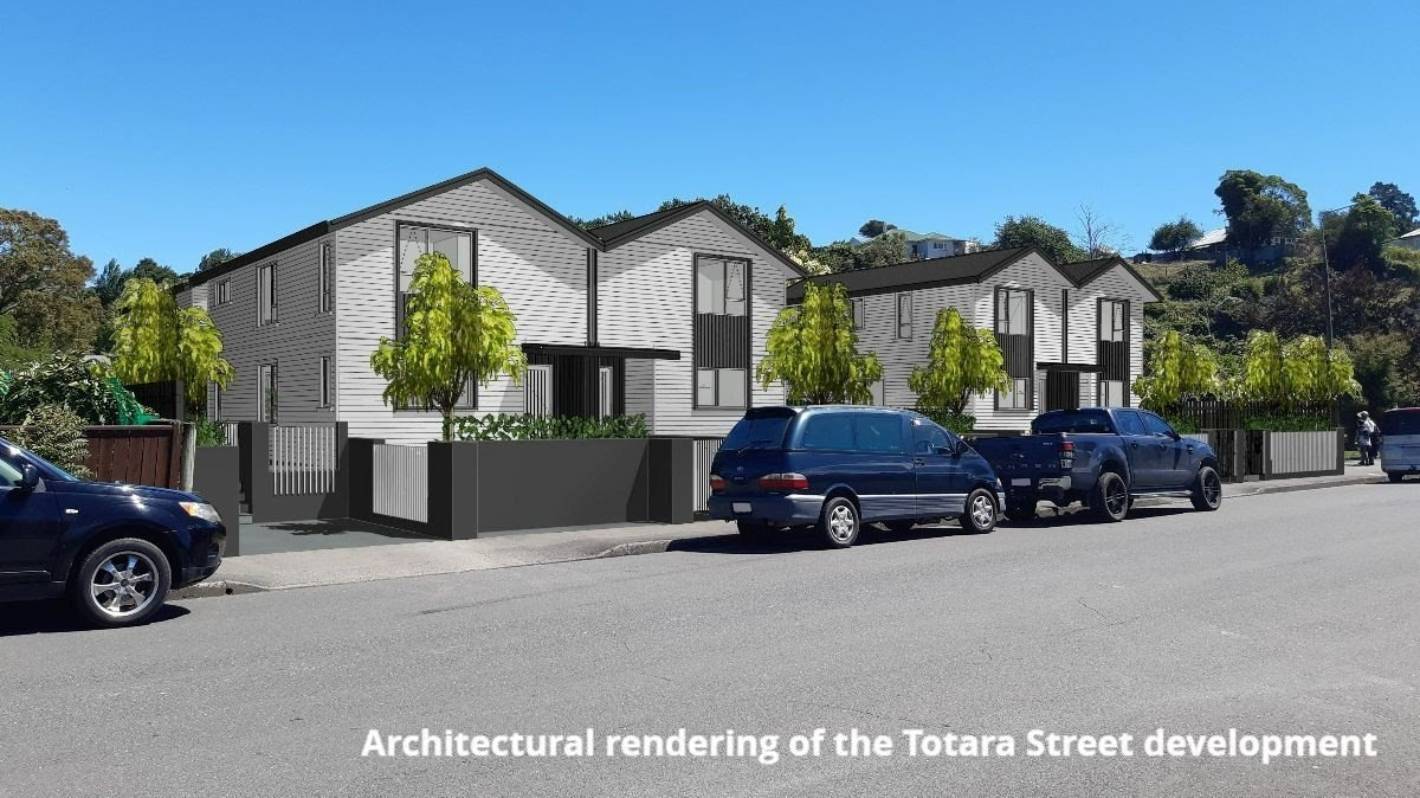 Architectural rendering of the Totara Street subdivision. Six new affordable rental homes are to be built on the site by the Nelson Tasman Housing Trust.

“We are very happy and very excited to be able to deliver good housing outcomes to people in need of housing and to scale up in a good location in Victory,” said NTHT Director Carrie Mozena.

The council purchased the properties in the 1990s as a potential site for the relocation of Victory Kindergarten should the Southern Link advance.

However, after the Nelson Future Access business case was approved last year, the properties were no longer needed.

The housing trust is in the process of applying for funding from the Department of Housing and Urban Development to develop the land into six houses.

Mozena said all is well, they expect the homes to be completed in 2024.

The tenant selection process was expected to take place within three to six months of the completion date, and all residents would be selected from the public housing registry, Mozena said.

The houses were designed as family homes, so they would accommodate “households with children”.

“We will review applications and interview several people looking to live there, then make selections based on a combination of factors including the suitability of housing needs for that area, [the] ability of people to get along well with their neighbours, ability to be reliable tenants and [be] positive members of the community.

“We do all of these assessments very carefully.”

Rents are to be set at income-related rates, equivalent to 25% of a family’s total income. The homes will be a variety of two, three and four bedroom homes.

Nelson’s deputy mayor and chair of the urban development subcommittee, Judene Edgar, said Nelsonians live in “one of the least affordable areas in the country for housing, with wages below the national average “.

“We know families are living in emergency housing, elderly people are sleeping in cars and the waiting list for social housing is growing, so there is a critical need for more affordable housing.”

Mozena said the homes would be long-term rentals designed to provide housing security, meaning families wouldn’t have to worry about schools moving or “increased transportation issues due to a unexpected move”.

The current dwellings on the site were “dilapidated and in poor condition”. Mozena said one was likely to be deconstructed and the materials would be recycled. The other can be moved. The council said current tenants had been kept informed throughout the process, which began in November 2021.