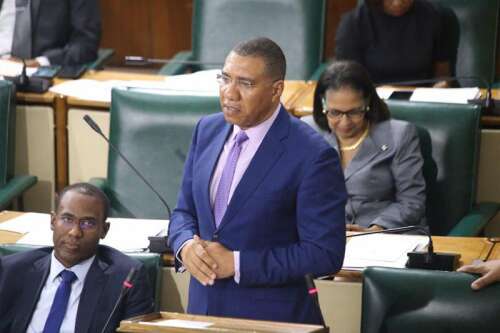 It was on this land, near Clifton, an informal community being regularized, that 10 incomplete structures were demolished last Thursday, following a warning from Holness to the House of Representatives.

Among those affected by the demolition were members of the security forces and civil servants.

Following criticism and complaints from some of those affected that they had not been advised to resign and a statement from the opposition National People’s Party that it will provide legal support to those affected, Holness is returned to Parliament on Tuesday, where he asked to set the record straight while offering more details.

Holness told the House that notices had been placed in the area and two meetings had been held with those affected by the landowner, SCJ Holdings Limited.

“I couldn’t tell whether or not it was with people from Clifton or people from the other side (those whose unfinished buildings were torn down),” Holness said.

“What is important is that this all needs to be investigated and I have asked MOCA and JCF to fully investigate this matter because I want to know if there is a government official guilty or complicit,” added the Prime Minister.

“I am very reluctant to give these kinds of specific details, especially when they are going to be investigated. It is not our job to investigate in Parliament, we are debating the matter but we are not investigating not here. There are some issues that I really can’t go into too much detail about,” Holness said.