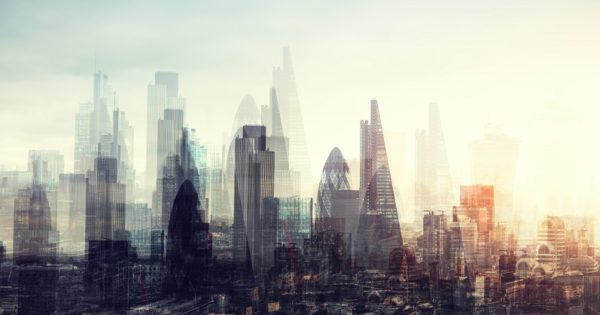 How have UK property funds office allocations changed more than a year after Covid?

So much has changed since the coronavirus pandemic emerged early last year. Remote working, once considered impractical, has become the norm. As economies start to open up and lockdown restrictions relax, companies are still figuring out what their hybrid working models might be.

Legal & General Investment Management’s real estate research manager, Bill Page, notes that employee and employer surveys have been broadly consistent in the first 12 months since the start of the ‘great experience’ of the job. from a distance. Workers have expressed a desire to work from home two or three days a week, while most bosses plan to reduce floor space.

But lately the sentiment seems to have darkened.

A KPMG survey in March highlighted a huge loss of appetite for downsizing, with just 17% of the world’s 500 CEOs planning to downsize their offices, down from 69% in the last survey in August.

But new figures from PwC in June appeared to reverse that notion, with 258 of the UK’s top employers saying they plan to cut office space to 9 million square feet, the equivalent of 14 talkies. -walkies of the City of London. ‘buildings.

Around the same time last year, when the outlook for the real estate sector was arguably even more uncertain, Portfolio advisor reported that fund managers were sticking to their office allocations.

Several daily trading real estate funds, which at that time were frozen following the onslaught of the Covid crisis, were heavily exposed to city offices and regional office buildings.

Canlife UK Property had a 60% weighting in offices last June, while Aegon Property Income and Aviva Investors UK Property had 53.2% and 32.3% of their portfolios occupied by offices. The latter two are currently being liquidated.

Twelve months later and while all the other major real estate funds have resumed operations, the managers have not radically changed the allocation of their offices. 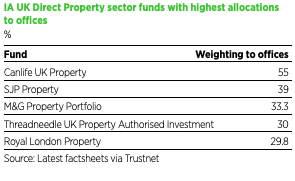 Royal London Property has 29.8% office space, which is roughly the same as a year ago, while M&G Property Portfolio had a slightly higher weighting of 33.3% when it reopened in May, compared to 29.1% a year ago. However, a spokesperson for M&G said that figure would drop to 24% after manager Justin Upton finalized the remaining sales lined up during the Â£ 1.3billion fund’s suspension.

Given the enormous uncertainty that has plagued the industry over the past year, AJ Bell, Head of Active Portfolios, Ryan Hughes is not surprised that allocations have remained largely static.

Until managers get more clarity on what post-pandemic corporate structures will look like, he believes allocations to the sector will continue to look skewed.

â€œWe will probably have a better picture in six to nine months, when things are maybe a little more settled. Perhaps this first wave of investor buyouts will have subsided by then and we can start judging what long-term, sensible asset allocation looks like in the broad commercial real estate market. “

There’s also the fact that trading inside and outside buildings can come at huge costs for fund managers, says Quilter Cheviot research analyst Oli Creasey.

â€œThe general assumption is that a buyer will have to pay almost 7% of the value of the asset in stamp duties, agent fees and other fees, while sellers will also have to pay external advisors.

â€œWhile the idea of â€‹â€‹selling all the office buildings and buying logistics assets instead may be appealing, the reality is that unless you can expect a 10% outperformance of the new asset in within a reasonable period of time, the trade is probably not worth doing.

“It also assumes that buying and selling occurs at book value, which is far from certain in today’s environment.”

The desktop will not become redundant

While managers may not have fundamentally changed their office assignments, the coronavirus pandemic has forced them to reassess the types of assets they own.

Richard Gwilliam, head of real estate research at M&G, said that while he doesn’t expect working practices to return to what they were before the pandemic, he also doesn’t think offices will become redundant.

But having worked from home for so long, employees will need “a more compelling reason to return to the office,” meaning the spaces will need to facilitate productivity and social interactions.

â€œOccupants will want to focus on high-quality spaces in well-connected central locations with attractive amenities, especially if they look after employee well-being and have high ESG credentials,â€ he says.

For this reason, the M&G real estate portfolio has “very limited exposure” to offices outside of city centers and manager Upton has sold “riskier assets” such as short term office, vacant office and out of town. city â€‹â€‹and business parks.

The LGIM page believes that the reports of “the death of the office” have been “greatly exaggerated.” â€œWe expect usage – employees on any given day – to be 10-20% less than the average of about 60% before the pandemic,â€ Page said.

â€œThis should be significantly offset by medium-term employment growth and changes in office layout, which means more space per person and more space for collaboration,â€ he adds. “Likewise, we expect the flow of new offering to be held back by less construction activity and conversion to other uses.”

L&G UK property manager Matt Jarvis said he and co-manager Michael Barrie had scrapped assets that offer “less flexibility” or “where the costs of creating a vibrant and attractive workspace for occupants in the post-Covid era have not been reflected in the market. â€A recent example is the sale of One Colmore Square in Birmingham.

Page also expects to see “a flight to quality”, with occupants avoiding “inferior spaces in peripheral locations” for those who create “dynamic and healthy workspaces”, focusing on the quality of the indoor environment and broader ESG benchmarks such as energy performance.

According to Jarvis, he and Barrie added existing assets like the new One Victoria Street development in Windsor and 120 Aldersgate Street near the Barbican in London. He also plans to commit additional short-term capital to major refurbishment projects at Quayside in Bristol and improvement work at Hodge House in Cardiff.

While property managers have taken stock of their portfolios, many have abandoned regional assets.

L&G UK Property’s office exposure increased from 28% at the start of 2020 to 19% at the end of May 2021, mainly due to disposals outside London. These now represent 19% of the portfolio against 23% previously.

Gerry Frewin, manager of the Threadneedle UK Property Authorized Investment Fund, also prefers a ‘south-centric approach’ with an emphasis on ‘poorly valued assets in highly supply-constrained markets’. Frewin does not have any exhibitions in central London.

Although London office stocks have held up comparatively better than their regional counterparts, Creasey says at this point it’s too early to say whether this will influence fund managers’ allocations.

He says: â€œThe demand for offices in London versus regional offices depends on who the tenant is. A major US investment bank might consider reducing its presence in the UK, but will likely retain an office in London. The city remains the first choice for a European headquarters.

â€œHowever, the benefit for regional offices is that their location can make them easier to occupy in a post-Covid world. Staff commutes are more likely to be shorter and by car than home commutes. -typical London work.