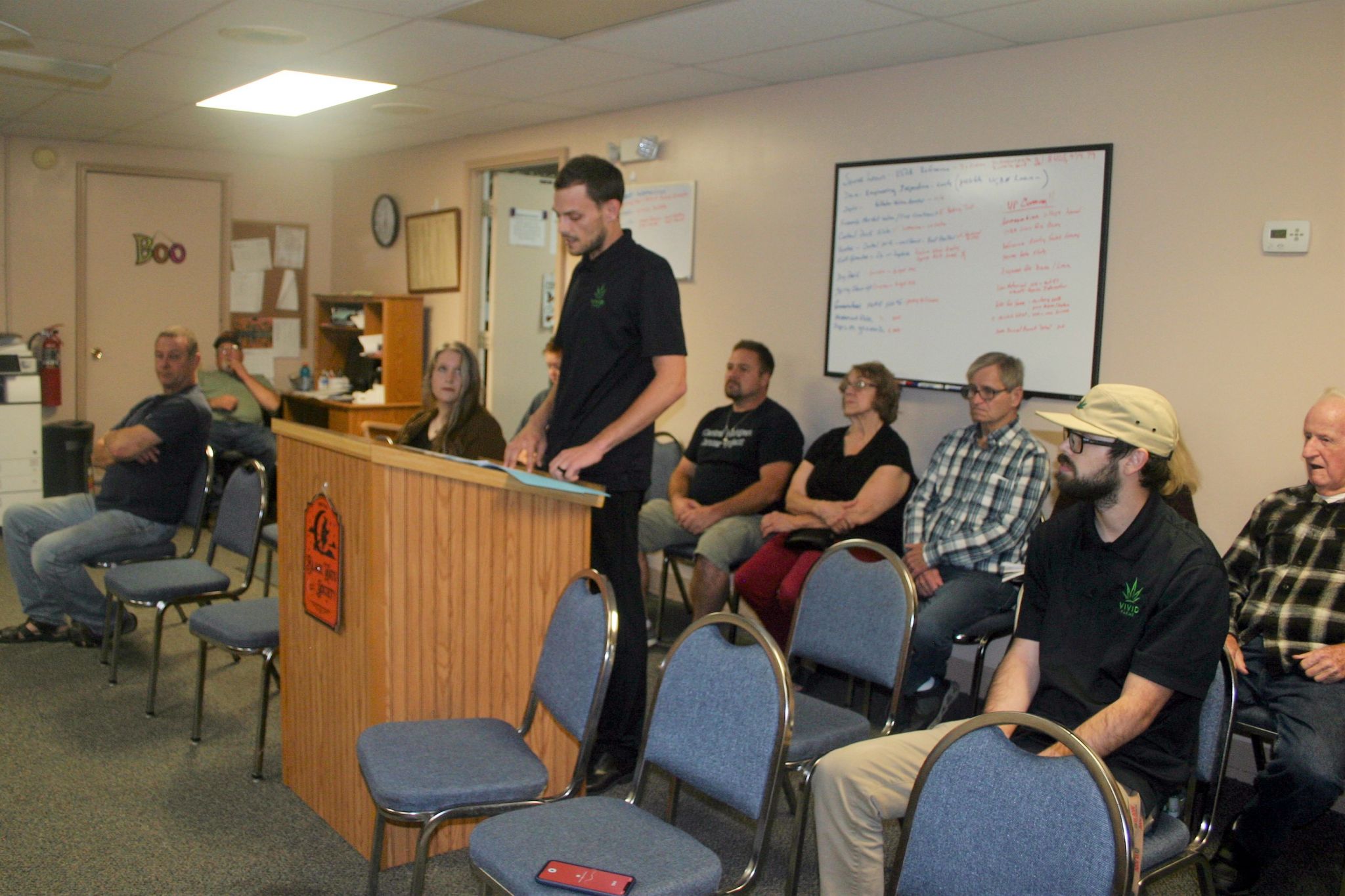 BARRYTON – For two years, a marijuana company leased 14 acres of land from the village of Barryton for the purpose of establishing a marijuana grow operation.

Recently, the company, M66 Group LLC, made an offer to the village council to purchase the land in order to expand its project.

At a meeting this week, residents voiced their objections to the proposed sale for more than an hour during the public comment portion of the meeting.

Many residents present expressed concern that the village was giving up more than it was making from the sale of the property.

Tyler Dutcher of the Vivid Farms Cannabis Company, which also rents land from the village, addressed the council at the meeting. Dutcher said he had tried to educate the council on the value of the “green zone” land and whether the village should capitalize on establishing a green zone.

â€œToday, the cheapest green zone you can find is $ 16,500 an acre, with the highest being $ 127,000 an acre,â€ Dutcher told the council. “Negotiations for this property started at $ 6,000 an acre. Council decided on $ 8,500 which is little more than the lease would have done for the village and now they have lost their assets.”

Board chairman James Soriano said when the M66 group made the offer to purchase the property, he and another board member contacted real estate agents to assess the value of the land before proceeding.

â€œWe contacted two real estate agents, they both understood it was for growing cannabis,â€ Soriano said. â€œThe low end was around $ 9,000 an acre and the high end was around $ 20,000. In our area we are at the low end of property value. more populated areas versus more rural areas. Depending on your location, it makes a difference. “

Lawyer Joanna Stevens, who works with the M66 group in the negotiations, endorsed the assessments of local realtors.

â€œThese numbers (which Dutcher represented) are not comparable,â€ Stevens said. â€œThere’s no way in the open market to get that much for the square footage of this area, even with the potential of the business, because you have other issues. If they don’t have people from This city, they have to move the operations here. There are logistics to consider. There are so many factors that people are not going to pay for it. “

When asked why the council had not offered the property for sale on the open market, Soriano replied that this was not an option due to the current rental agreements.

â€œIn the contract that was created by the previous council, a clause was inserted for the right of first refusal to buy the property,â€ Soriano said. “This is what triggered the offer to purchase the land. M66 Group approached me with an offer. I, in turn, contacted Tyler Dutcher and informed him of the same opportunity, s’ he wished it. “

In an email dated July 23, Dutcher told council that “Vivid Farms would like to continue our lease as is.”

â€œWe are currently not interested in purchasing the village land at this time, and we recommend that the council reconsider the value of the land before offering a sale to any party involved,â€ said Dutcher.

The Council decided to continue negotiations with the M66 Group.

FOR RENT OR FOR SALE?

Other residents present questioned whether it would be better financially for the village to retain ownership of the property and continue with the lease contract.

The village currently has rental contracts with M66 Group and Vivid Farms for the sections of the property in question.

According to the minutes of the village council meeting, the M66 group approached the council in July with an offer to purchase the 14 acres they currently lease.

â€œIf the board decided to sell, it would have to be a cash sale,â€ Soriano said. “The purchase contract needs to be renegotiated. It will go back and forth until both parties are satisfied.”

Soriano explained that the council’s reasoning for selling the property included obtaining money for necessary repairs to the pavilions in the village park, which are estimated to cost $ 20,000.

â€œBecause this property was acquired through the USDA for the sewage system, $ 23,000 would go directly to an additional payment for the sewer line,â€ Soriano said. “The rest of the funds would go towards repairing the two pavilions. That was the mindset of the council.”

Another benefit they considered was the additional tax revenue from having the property listed on the tax roll.

M66 group representative Judd Jaffee told those present at the meeting that by selling the property to them, the village would earn between $ 5,000 and $ 10,000 per year in tax revenue.

â€œWe came to the village after talking with our lawyer, thinking this purchase would be good for everyone,â€ Jaffee said. “We think it would help us grow if we could mortgage (the property) and the bank would give us money to build a bigger facility and make more money, which would bring more money to the village and would employ more people. There is a lot of motivation. We would like to work to improve this community.

Soriano said an important factor they took into account was a clause in the contract calling for a donation of 1% of net income to the village from growing facilities owned by the M66 group.

â€œThe 1% is my concern,â€ Soriano said. â€œOne percent of a $ 14 million operation is amazing and it was understood – that the village was going to benefit and that the funding could be used anywhere. Part of the value for me was to nail that 1% donation. “

Soriano explained that with the current MRA rules, the village does not receive money from cannabis companies other than license fees and rental payments.

â€œEven with operational businesses, on a grow facility right now, there is no excise tax that is offered as is the case on a supply center,â€ he said. . “All this money that the village thought it was going to get, they won’t get it.”

Acting President Kathryn Kerr said that currently the excise tax that goes to municipalities comes only from procurement centers or a micro-business.

Both M66 Group and Vivid Farms have said they plan to eventually establish a supply center.

â€œI was trying to get them (businesses) to that 1% because it’s going to help our village thrive,â€ Soriano said. “We found out later that the village cannot include this in the sales contract. It’s in the business plan, but the business plan is not binding.”

Soriano said the two companies accepted, in principle, the 1% donation.

Some residents have expressed concern that the million dollar industry may never happen, saying that in the two years since the M66 Group started renting the property, there have been little movement on the project.

In an email to the village council, Dutcher said his main concern was the intentions of the M66 group in trying to buy the property.

â€œThere has been no forward movement on the property in two years, with the exception of ours,â€ Dutcher said. â€œMost village permits don’t have a forward movement. This ties up tax money and valuable land that the village could raise in the hundreds of thousands of dollars. Once the land is gone. the hands of the village, it can be sold with the license that the company already has for millions with the village at a loss. “

Stevens responded by saying that this was something she dealt with on a daily basis when working with municipalities and the cannabis industries, and this is dealt with as part of contract negotiations.

â€œWith the contract, that’s how you protect the village,â€ Stevens said. â€œThis is how the municipalities make sure how these plots of land are used by these businesses and that that (development) actually happens. There are timetables that can be set. If some of these businesses lose their funding and cannot continue, there are processes in place for that.

“I have yet to see where people don’t do what they said they would do, especially if it’s under contract,” she added.

Jaffee said they made progress on the current project and carried out excavation work, construction of road accesses and installation of a septic tank and septic field for their growing facility. class C.

In his presentation to the board, Dutcher also accused Soriano of conflicts of interest in connection with the sale of the land to the M66 group.

â€œThe first time Jim came to speak, we discussed his role in helping the M66 group and how they had done everything – design their facilities, locate contractors, manage the site and logistics. “said Dutcher at the meeting. “He said they were helping him with the rent, so it paid off.”

Residents asked Soriano whether the accusations were true or not.

â€œI don’t help with business,â€ Soriano said. â€œWhat I did was help with the measurements for the building permits. They’re not here so it’s easier for them to call me and ask for help. no different for them than for Tyler. “

Soriano said in an email to the Pioneer that he understands that to some this may seem like a conflict of interest as he is renting his house to the M66 group.

â€œI don’t work for the M66 group, I rent from them,â€ Soriano said. “I started renting from them in June 2020, before running for the position of village president. It was no secret to anyone where I lived or who I rented to.”

â€œI have been involved in consulting for many years,â€ he continued. “If I worked for the M66 group, I would just refrain from anything that concerns them. The point is, I don’t work for them.”

When asked if the residents had a vote in the decision to sell the land, Soriano replied that they had a vote.

â€œYou may not have a final vote, but you do have a voice,â€ he said. “You can bring information to the board that could change a decision.”

No action was taken on the sale of the property during the meeting.