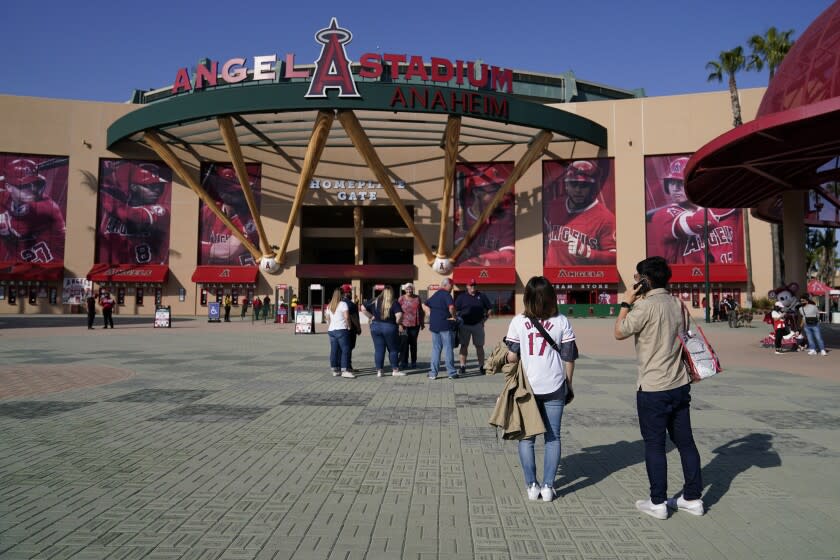 The sale of the land at Angel Stadium took a giant step toward completion on Monday, when a judge ruled that the city of Anaheim did not violate the state’s public openness law during the negotiation of the agreement.

“There is no reason to overturn the decision to sell the stadium site,” Orange County Superior Court Judge David Hoffer wrote in his interim decision Monday.

Hoffer dismissed what was presented as key evidence – statements by councilman Jose Moreno and former city manager Chris Zapata – as “not credible” and said he had looked into six claims made by a group of Citizens who sued the city to end the deal.

“None of these claims are substantiated,” Hoffer wrote.

Hoffer gave each side 10 days to object before his decision became final. If that happened, the city would face one remaining hurdle to complete the sale.

In December, the California Department of Housing and Community Development ruled that the sale violated the state’s affordable housing law. The state and city discussed a negotiated resolution, most likely with the city paying a $96 million fine that would then be used to expand affordable housing elsewhere in Anaheim. The city could also sue the state.

If that hurdle is cleared, the city could strike a deal approved in 2019, under which a company controlled by Angels owner Arte Moreno would turn the 150-acre stadium site into a mini-city by building homes, shops, restaurants, hotels and offices in what is now a sea of ​​parking lots surrounding Angel Stadium.

The team would remain in Anaheim until at least 2050, and Moreno could decide to renovate the current stadium or build a new one. City would receive $150 million in cash, plus inclusion of a park and at least 466 affordable housing units, and projected tax revenue of $652 million into city coffers over 30 years, study finds of economic impact commissioned by Moreno. City consultants reviewed and endorsed this study; Anaheim did not commission its own study.

In a statement, Anaheim Mayor Harry Sidhu said the interim decision was the correct one.

“It confirms that the sale of the stadium was a broad public process with community participation and debate,” Sidhu said. “We look forward to a final decision and move forward with a plan for the future of baseball in Anaheim that will generate revenue for our residents and neighborhoods for years to come.”

In their statements, Jose Moreno and Zapata testified that the council agreed to sell the property — rather than rent it — and did so behind closed doors, abusing an exception to state law that allows a closed-door discussion on “price and terms”. The city and the angels, according to city records, did not enter into negotiations until two months later.

“It just doesn’t make sense for the city to agree to sell the stadium site without knowing exactly what it would receive in return,” Hoffer wrote.

Hoffer also wrote that even if he accepted what Moreno and Zapata had to say, there would be nothing wrong with the city having a closed-door discussion about whether to sell while limiting public disclosure. from discussion to the “price and terms” of a potential deal.

“For a legislative body to discuss the price without discussing whether the price is for a sale or a lease would lead to absurdity,” Hoffer wrote.

“The discussions and decision surrounding the sale of the stadium site were anything but secret,” Hoffer wrote.

Kelly Aviles, an attorney for the People’s Homeless Task Force – the citizens’ group that sued – said in a statement that she disagreed with the decision. The public hearings cited by Hoffer took place just before council voted to ratify the agreements reached between city staff and the Arte Moreno company, not during the negotiation process.

During a court hearing earlier this month, Hoffer said he expected the losing side to appeal. Aviles said no decision has yet been made on whether to appeal, but said she expects such a decision “soon”.

Although a court could stay the sale pending the appeal, this is considered unlikely. During the hearing, the parties discussed potential penalties that did not involve voiding the deal, meaning a court could let the sale continue and consider other options to punish Anaheim if the city ​​was later found guilty of violating the law.

In a footnote, Hoffer cast Jose Moreno and Zapata in a negative light for disclosing closed-door discussions, even though they believed they were disclosing wrongdoing.

“This court frowns upon the public disclosure of confidential information obtained behind closed doors without the permission of the board and without even trying to get court approval“Hoffer wrote. The italics were his.

This story originally appeared in the Los Angeles Times.